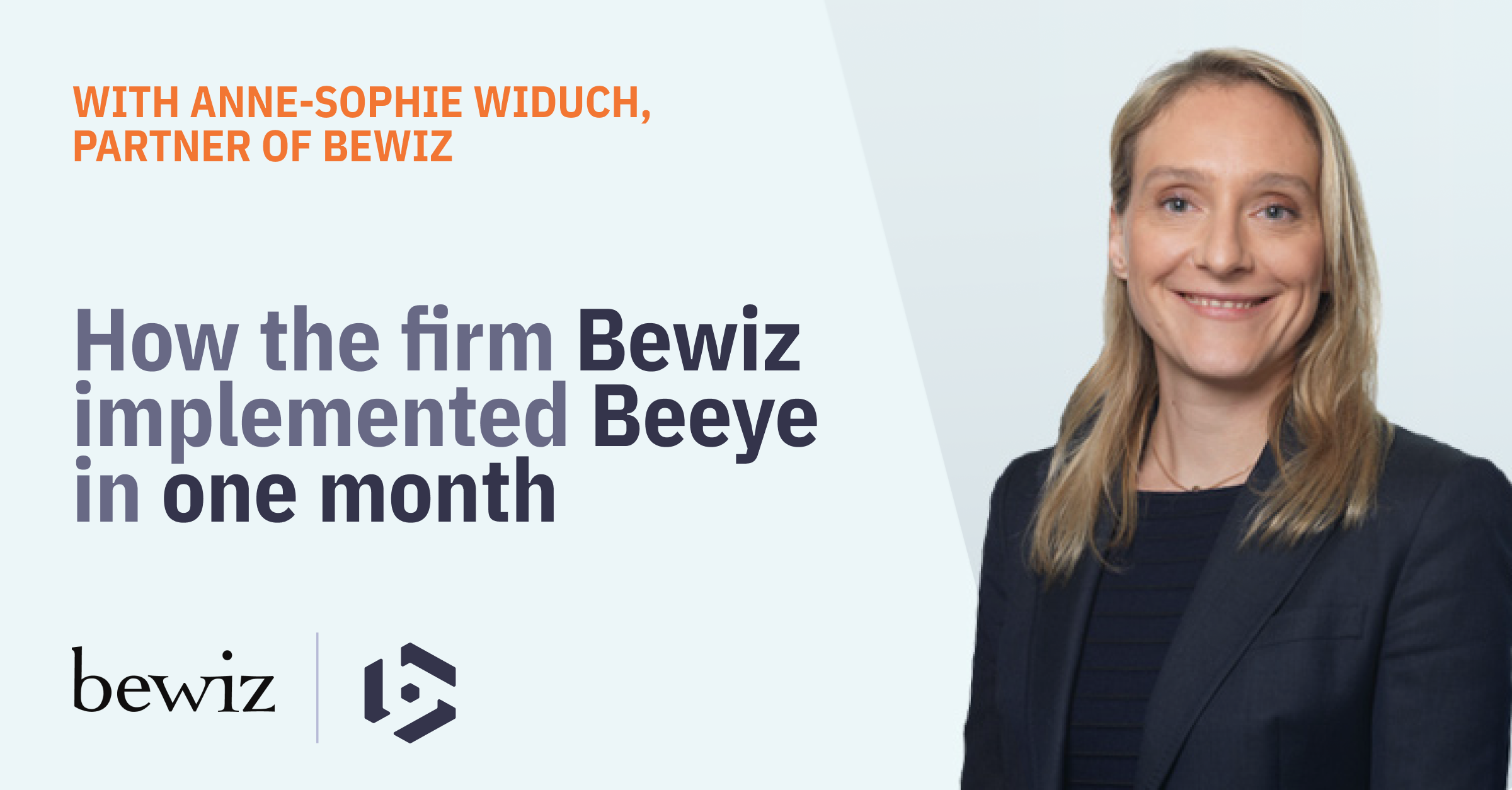 How the firm Bewiz implemented Beeye in one month

The best of the best is to be well organized. With a staff of 50 strong soon Bewiz in Paris wanted a modern and efficient way to distribute and monitor its workload, while encouraging everyone to work independently. It opted for Beeye and was fully operational in less than a month. Here’s the story of a successful implementation.

Bewiz was born in 2008 from the merger of two firms. At the time, the firm had 10 employees. Two other entities quickly joined up. It has since been growing at a rate of 10 to 15% per year, without any new acquisitions. In November 2021, Bewiz will have 4 partners and 46 employees in Paris serving approximately 700 clients.

The motto of the new entity, in which asset management plays an important role, is: "Supporting your projects and those of your company".

Since the end of 2019, Bewiz has been run according to the principles of the liberated developed by Isaac Getz[1]. This approach consists of freeing ourselves from practices based on mistrust and control to co-invent an organizational mode based on the responsibility and freedom of employees. Its guiding principle: those who do, know.

Anne-Sophie Widuch has been a partner at Bewiz from the outset. She explains the firm's management style: "Our employees are the privileged contacts of our clients with whom they establish and cultivate a relationship in the fields of accounting, law, employment and assets. They are responsible, autonomous, and call on the partners when they feel they need them. In other words: Work when you want, where you want. we are here to help you.”

The approach may have been surprising at first, but the needs brought about by the health crisis and the lockdowns have accelerated its implementation and demonstrated its effectiveness.

In search of times lost

Time recording was a pet peeve of many of us, including myself," recalls Anne-Sophie Widuch. “And also the source of a lot of frustration. In auditing, it's relatively easy - you count the days spent at this or that customer. But in the other divisions, time flies, and you're always jumping from one thing to another... So when we filled in our time sheets, often at the end of the week, we had largely forgotten everything we had done. How could we remember such and such quarter of an hour, or such and such half hour? We used Excel spreadsheets. Everyone had their own. I myself used Outlook to plan my tasks... but I couldn't enter the working times! The result: too often, the hours spent were distributed on an empirical basis, for example by taking on more work for a client for whom we knew we had a comfortable time credit. And we, the partners, had to run after these famous time sheets, follow up, in short, play schoolteacher... when we had much more to do! We couldn't cope.”

A collaborative implementation in less than a month

Anne-Sophie Widuch coordinated the project, in cooperation with the ad hoc Beeye team. She participated in all workshops, without any notion of hierarchy, in the spirit of the firm. The solution was implemented according to the Beeye Quickstar™ method, which combines theory, practice and empowerment.

Each segment - accounting, social, audit, legal, wealth management, etc. -- assigned delegated a volunteer adviser. Guided and supported by a Beeye consultant, these advisers first interviewed the teams to gauge their needs and build the project with them. They then proceeded to the parameterization. They discussed the matter with other employees to ascertain the integrity of data and confirm the proposed organization of nomenclatures and associated tasks. This enabled them to prepare and engage everyone in the change process and to gather their operational points of view.

A launch event was organized at the end of this preparatory work by way of a kick-off as well as an introduction. “It was more than just a training session," says Anne-Sophie Widuch. There was no obligation to attend, but the entire firm showed up! On the designated day, in a room rented for the occasion, all employees had access to Beeye. With the help of Beeye's advisers and consultants, they updated their portfolio directly, and prepared this sliding schedule that would now accompany them every day.”

What has already changed

It is still too early of course to provide metrics on the time saved or the budget tracking of assignments. The solution was implemented in September! But the first results are already there.

The solution has been very well received, without exception," explains Anne-Sophie Widuch. “And it's not a question of age: our three most senior employees were not resistant, quite the contrary: they were the first to find the idea brilliant, even though, thanks to their experience, they are the most organized among us!”

“For me, Beeye is first and foremost for the staff,” concludes Anne-Sophie Widuch. “Not everyone has an innate sense of organization – far from it! Beeye helps everyone, from the youngest to the most experienced, to get better organized. Visibility, autonomy, cooperation – all are perfectly in line with our vision.”

How to Calculate the Earned Value of A Project?

How to Deal With VUCA in Project Management?